When it comes to domestic terrorism, social media is failing us.

On the Internet, there are millions of sites where you can share your opinion. Twitter alone has over 100 million logons a day. Whether as a platform for political discussion or as a publisher, the site has the ability to police user comments. The question is whether they are responsible for doing so.

In an ideal world, administrators would respond to all reports immediately. The site would notify law enforcement of threats of violence in a timely manner. Yet time again, despite evolving rules, it has become clear that social media will not take responsibility for the user-generated content. When the government enacts laws, or it costs the site advertising revenues, only then will they do so.

What Constitutes “Domestic Terrorism” and “Threats of Violence”?

Let me be clear. I am not talking about trash talking, insults, vulgarity, or racist comments. I am not referring to “locker room talk”, tasteless jokes, or blatant misogyny. We should have a dialogue on these topics as well.

I am talking about are posts where you believe someone in law enforcement needs to be contacted. You feel that the authorities ought to take a good hard look at the person, group or movement involved.  These are the posts which seem to target a specific person or group and promises some type of retribution. We believe hitting the report button will bring the matter to the appropriate person’s attention. But it is not.

We may not be able to define what exactly makes certain posts troubling. We know them when we see them.

Sites are not required to do anything. It is not an issue of privacy. It is a matter of convenience and ultimately, revenue.

Cesar Sayoc, arrested for allegedly mailing pipe bombs to Democratic leadership, had been reported for threatening tweets, but Twitter did nothing until after he was arrested.

And this is the pattern. After some school shooting or bombing, the public learns the crazed gunman was threatening to “do something.” Whether it is disturbing comments, a published manifesto, or posts revealing their plans,  we read and hear accounts that the individual was unstable. The discussion rarely focuses on why law enforcement wasn’t notified.

The media giants of Facebook, Twitter, Gab and Reddit publish these posts to be consumed by millions of readers. Large companies are behind these sites with the kind of resources that, at bare minimum, should be investigating every time someone is so concerned, they send a report. The user wrongly believes that the administrators review all these notifications within 24 hours and then take immediate action to remove the offending material. This is not the case.

Currently, there is no mandate forcing the sites to adopt a formal policy, hire staff, and develop a system to alert law enforcement. We don’t always agree what constitutes a threat. We have no consistent approach. Posts that may be banned on one site might be acceptable on another as there are no industry-wide guidelines.

To add to the confusion, we find threatening comments across the Internet. They are in large sites like YouTube, or small blogs that may not be regularly maintained.

Recently, I reported a user targeting Democratic leadership, journalists and other public figures. Threats to lynch people are peppered throughout the timeline. You would expect Twitter to be sensitive following a week of pipe bombs and mass shootings. They weren’t.

The posts in question are below. These are a small sampling from the account I reported.The user’s timeline shows similar content. While that alone is problematic, the sheer volume is more troubling.

At the time of this writing, the tweets remain up, the account is active and Twitter has not responded. Worse, since I reported the tweets, the user since made a threat against John Podesta.

“hope your [sic] doing neck muscle exercises. I want to see you wriggling For [sic] 5 mins with the rope. we have it all.” 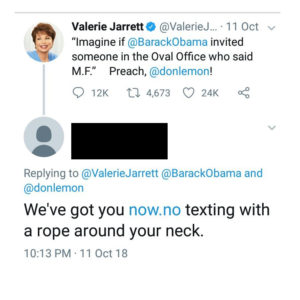 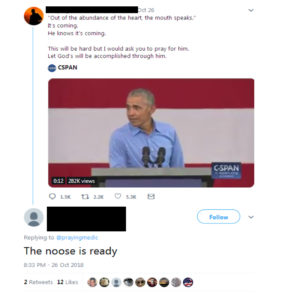 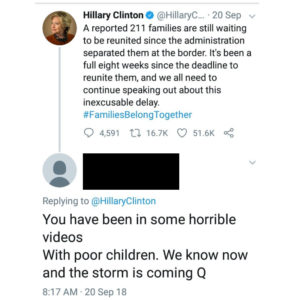 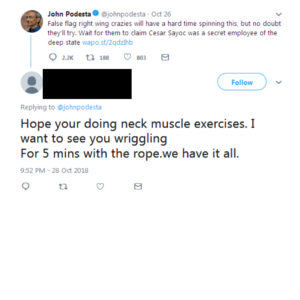 What is the solution?

As long as capitalism reigns supreme, social media companies are going to focus on advertising revenue. If law enforcement taught us anything, it is that self-policing doesn’t work. We need public oversight. I recommend a central clearinghouse for users to report posts, have them reviewed and then forwarded to the appropriate law enforcement agency. This could be accomplished by taxing social media advertising revenues to finance the system.

It is obvious left to their own devices, most major sites aren’t going to address this growing problem.