The current President of the United States campaigned on building a wall between our country and Mexico. He promised Mexico would pay for the wall, too. Since the election of 2016, Mexico refuses, especially since they do not support the idea. Not only does Mexico not want a wall, neither do the majority of American citizens.

It seems the people supporting this notion are afraid of brown-skinned colored people. Donald Trump called them rapists, murders and not the best people when it comes to people crossing our southern border. It is apparent that hatred and fear are the motivating factors in wanting a wall to separate the United States from Mexico. After all, no one in this country is screaming for a wall between the United States and Canada. Keeping White people out must not be a priority. 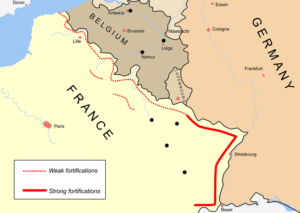 Walls have been built by civilizations in the past for security and protection, let’s see what history has to say about that. The Maginot Line extends along the border between France and Germany. It is a heavily fortified, armed and well manned.  That was the design to keep the German Army from invading France, and WWI proved those defenses were useless. The Germans simply crossed the border from Germany into Belgium, then into France.

During WWII, Hitler had massively upgraded Germany’s armed forces. Naturally, the French fortified their defenses along the Maginot Line. Hitler realized even though he might win a direct assault, he would suffer more than acceptable losses. Hitler dusted off the playbook from WWI, and marched into France via Belgium. That makes two times the fortified wall known as the Maginot Line failed to protect the people of France from German invasion. 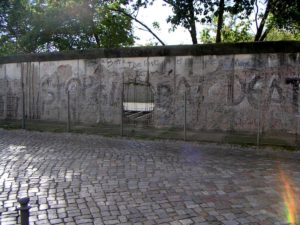 was erected after WWII as a division between democracy and communism, NATO and the Iron Curtain and more importantly, the United States and Russia. Berlin, which had been the capital of Germany during WWII, was divided between east and west and then the entire country. East Berlin was the Capital of East Germany, while Bonn was the Capital of West Germany.

The West enjoyed freedom and democracy, The East labored under communist rule. Families were held apart by the Berlin Wall. Even if freedom was your purpose for wanting to travel to the West side, access was denied to demonstrate where the real power resided. Ultimately, this did not stop the citizens of Germany from physically tearing down this barrier. Germany was unified once again. Berlin was made whole and restored as the Capital of a unified Germany.

For our Evangelical friends out there who need a reminder of what the Bible says, just read the Book of Joshua and find out what happened to the Walls of Jericho.

More of a Warm Blanket

Walls have limitations, but people do not.

History is the best teacher we have if we watch, listen and learn. Our species seems to ignore the important lessons of history. Walls rarely achieve their intended purpose. Innovation has always found its way over, under or through any barricade, and a wall along the border of the United States and Mexico will be no different.

Again for our Evangelical friends, I do not support building a wall to keep out the indigenous people that God put here.