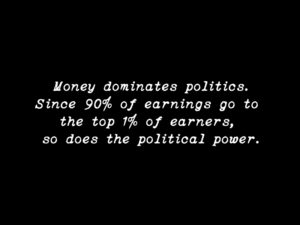 The 2018 Midterm elections are over, but the race never ends. Neither do the underhanded political tactics.

American voters face an election cycle every two years. House of Representatives seats are up for grabs, and with it, the accompanying dual prizes of oversight and subpoena power.

In short, this means one third of the power of Washington is decided biennially.

It is all too easy to let apathy take root. This is the real threat, it is a constant attack on the voter. With these displays of power, voters are made to feel unimportant, and they refrain from letting their voice be heard the place it matters — at the ballot box. Defeatism is born.

When voters do not exercise their right to vote, corruption wins. Blame cannot be laid solely upon the non-voter. Democrats and Republicans both have had scandals that has resulted in feelings of disenfranchisement of the public in the political process.

As a campaign strategist, one of the biggest complaints I have heard on the campaign trail is the looming issue of money in politics.

Money is driving voters from the polls

Media coverage dictates which candidates will raise the most money.

It does takes money to run a campaign. The higher the office, the more money you have to raise. You need to pay staff, buy advertising and cover travel expenses. Candidates in a statewide race are required to travel to meet all their constituents and it costs much more to travel outside of the larger metropolitan areas. Races for governor and the U.S. Senate seats fall into this category.

Why do House of Representative campaigns in a small, geographic district require raising millions of dollars? The truth is, they shouldn’t.

The cost of being the boss

The media rates a candidate’s potential for success on how much money they have raised. A congressional race results in being seated in a federal office, but it is still a wholly local election. Every congressional district has an average of 775,000 voters. In most states, that is an manageable area to cover, and the candidate should be able to sleep in their own bed at night.

A true, viable candidate will also collaborate with other party candidates. Coordinating with voters electing their congressional representative, state house or senate seat, governor, or any other candidate, will reduce costs. The candidate can cover more ground and be more efficient.

It is expected that the only travel expenses incurred would be for gasoline to drive from one end of the district to the other, covering all points in between.  All candidates will have other expenses such as mailers, advertising and signs. They may have to pay for help with developing a website or social media, but volunteers are usually able to provide these services. Most importantly, if you are going to fund raise, it should occur in the district. If you cannot earn enough gas money from the people you want to serve, you have not earned their trust.

Let us acknowledge that it does take money to run a campaign, but the question is: How much?

As we learned in the 2018 midterms, money can also be used as a weapon against your opponents.

This is where the discussion needs to begin, because this is a side of politics usually hidden from voters.

Getting your name on the ballot

Let’s focus on Arizona’s 8th Congressional District. The race was largely ignored by the national media, but the public needs to be aware of the underhanded political tactics that took place.

In the spring of 2018, there was a Special Election to fill the vacancy left by the disgraced Rep. Trent “Will You Have My Baby” Franks (R). As a refresher, Franks resigned due to sexual misconduct after soliciting staffers to carry his child. There was a scramble to fill his seat and candidates had a very small window to get their names on the ballot. 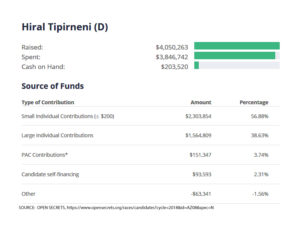 One Democratic Candidate, B. Westbrook ran a campaign that focused on the people. She did not hold one fundraiser. Her Campaign Manager was strictly volunteer because he felt it was important to get a candidate elected without accepting money from corporations or PAC’s.

Her opponent, Hiral Tipirneni, had a much different approach. This candidate traversed the nation in search of people willing to open their wallets. She accepted money from the medical industry, drug lobby, and corporations.

Most people are unaware that it takes months of pounding the pavement to gather signatures in order to be eligible to be on the ballot.  Unless you are Hiral.

Not only did Hiral hire an organization to get her signatures, La Machine, she raised a legal challenge against her opponent to disqualify her petition signatures.

In effect, she went to court to have her opposition — a fellow Democrat — thrown off the ballot.

The measure of credibility

The truth is the measure of a candidate’s credibility.

Hiral claimed to have known nothing about the challenge. She said it was one of her supporters, who shall remain anonymous, and she was not going to stop a supporter. The truth of the matter is Hiral bankrolled the operation to have Westbrook removed from the ballot. Voters only care who the D or R on the ballot. You should take a moment to click on the link above, because the name of the law firm involved will come up later in this article.

If we chastise Trump for his inability to tell the truth, then we must also call it out when the Democrats do the same. Anything else would be hypocritical.

Likely, the news of her dealings with fellow Democrats was not initially widely shared, as we will see.

Democrats that were paying attention were revolted by the tactics used by Hiral. Remember, this was a special election that was being held in April. Those voters who found her tactics distasteful and who decided to abstain from the ballot box would have undoubtedly put her over the top.

You cannot use divisive tactics to unite people

In Arizona, the primaries are held in August. Candidates must have their petitions filed by June. The dates vary every election cycle. For the congressional race in the 8th district, there were three candidates that submitted the required amount of signatures to be on the Democratic primary ballot. Hiral, Bob Olsen and Bob Musslewhite.

Bob Musslewhite chose not to run in the Special Election, but continued to collect signatures for his campaign for the November election. Bob Olsen took a different approach. His story is worth the read.

Once she lost, I had a little over three weeks to get the remaining 1300+ signatures needed to get on the ballot. There were 4 of us, myself included, and we knocked on doors, stood in parking lots and libraries, and one secret that I’m keeping for myself if I decide to run again in 2020. There’s an election cycle every two years.

On the day we reserved with the Secretary of State to turn in our petitions, we had about 150 over the minimum number required to make the ballot. But we did it and I’m proud for having done it the grassroots way. We got our signatures from people that wanted to make a difference in a campaign that was about the people. There were no paid signature gatherers but what we gave to those that worked for it. There was no hired machine.

Hiral respected none of the courtesy I showed her by having me removed from the ballot.

She won’t get my vote, and I won’t encourage anyone to vote for her.

How to lose friends and alienate your base

Hiral dusted off the old playbook, and sued to have both Bob’s Olsen and Musslewhite names removed from the ballot (I told you we would see this same law firm again). Not only did she pay the same law firm, coincidentally, the same supporter is the name on the paper filed with the court.

She was successful in having her opponents removed from the ballot, but not without controversy.

This time, her tactics were shared — loudly and across multiple social media platforms. What you didn’t hear in the media is that many Democrats openly supported the Republican Debbie Lesko.

The result? Hiral lost again, but this time, she was trounced. It was one race where the blue wave pattern didn’t hold true.

If you want to know your candidates, follow the money.

There is a source, Opensecrets.com. This site will show you who puts money in the pockets of the candidates. Donations will tell you who supports the issues you do and don’t.

A candidate that takes money from lobbyist is subject to the whims of that organization or corporation.

For example, a candidate that takes money from the health and pharmaceutical industries is not going support single-payer healthcare. You can apply this method to any issue that is important to you. But more importantly, it should show you which candidates you should support.